Sultanpur is an agrarian district of the eastern-plain zone of U.P.. It lies between 81032! and 82041! East longitude and 25059! And 25040! North latitude with geographical areas of 4436 km2. Initially district was divided into four sub-divisions and 19 blocks for administrative and development purposes. Later on it was again reorganize and finally divided into 7 sub divisions, 24 blocks, 187 Nyaya Panchayats comprising of 2,531 villages (1991). Again the district has been reorganized excluding 2 subdivisions, 10 blocks, 73 Nyaya Panchayats and 800 villages. At present district has 4 subdivisions, 14 blocks, 113 Nyaya Panchayats and 1731 Villages (July -2010).


District at a Glance

Gomti is the only important river of the district . It enters in the district from North-West corner and runs in a well defined courses towards South-East and finally flows into Jaunpur district. The major portion of the district (49.33%) lies in the main basin of Gomti which drains about 17.67% of the total area. Apart from these, there are numbers of water bodies locally known as ‘tals’ which also play an important role.

The district has semiarid climate with temperature ranging from 50 to 230 C and upto 470 C the average annual rain fall is about 900 to 1000 mm and confined mainly during July to September. Hail and Dust Storms are observed only during March to June.

The soils of the district are farmed through alluvial deposits carried by river system comprising Ganga, Gomati and Its tributaries. Physiographic variations in the district has contributed to the development of soils of the different physical and chemical characteristics. A good proportion of land is beset with productive hazards such as water logging, erosion and sodicity. The major textured group of the soil in the district is sandy, sandy loam, loam and clay loam.

Out of the total geographical area, about 67% is devoted to Agriculture. The Culturable and non-culturalble waste land contributes 14.85 % and 18.21 % respectively.

As per the survey of the district, it has been observed that agro-ecological situations are directly correlated with physiographic situations, land quality and availability of irrigation facilities of the area. Broadly, the farming situations have been divided into four i.e. productive plain, sodic, ravenous and waterlogged conditions. The first three conditions, are further divided into two i.e. irrigated and rain fed. The waterlogged areas are temporarily or permanently submerged in nature. Bore well is the major source of irrigation (48.5%) followed by canal (38.65%) and public tube wells (9.17%).

Next to crop production live-stock is another component which helps a lot for raising the family income and improving soil fertility. The majority of breeds in the district are non-descript with low productivity. The condition of live- stock is worst in problem areas due to shortage of feed, fodder and occurrence of diseases.

The district has an immense potential for fresh water fisheries through large system of rivers and inland water bodies. Gomati River is an important source of fishes which covers a length of 207 km in the district. There are 5,636 ponds with water spread area of about 4,500 ha. Majority of the fisherman population is concentrated in the village along the bank of Gomati River. Catching and selling of fishes is the main source of their livelihood. Housewives are mainly involved in rope making from Saccharum species which grows widely in the ravinous areas.

Natural vegetation mainly consist of tropical dry and sub-tropical type of species, mixed, open and woody vegetation are common. The patches of reserved forest have been raised along the river side whereas, social forestry is raised on community land. Among the tree species some are exotic and indigenous in nature. The natural and raised vegetation comprises of good timbers of Acacia arabica(babool), Dalbergia sissoo (sheesam), Butea monosperma (palas) etc. As for as grown plantations, Mangifera indica (mango), Syzygium cumunil (Jamun), Azadirachta indica (Neem) and Madhuca latifolia (Mahua), were the most favored trees of the district. The ravines are enriched with the growth of babool, bamboo, Saccharum and other species, whereas Sporobolus species, Acacia species and Butea Monosperma are the common vegetation of sodic land. All the wild lives common to plain are found in large number. Neelgai (Blue bull and wild pigs) emerges since last 8 years and become a serious problem for agriculture in the district. The extent of damage is increasing every year due to multiplication at faster rate.

As a whole district is characterized by typical socio-economic and agro ecological situation. The majority of the farming community falls under marginal and small categories with fragmented holding scattered at different locations and poor resources. The soil condition of the district is inherently productive but a good proportion of land is beset with productive hazards as stated earlier.

Thus, there is a constant need for vertical as well as horizontal improvement of agriculture production in an integrated manner to uplift the socio-economic condition of the farming community. The majority of farming community suffers with a number of problems such as low level of knowledge, poor credit facility, input support, communication, poor condition of soil, fragmented holdings and unemployment. Keeping in view the above, the following points have been taken into consideration for improvement of agriculture development in the district.

Low productivity of cultivable land, no use of cultivable wasteland and also not diversifying into other economic activities to supplement their income were some of the major issues of the district. Considering these three fold problems, KVK has made a strategy to improve such situations by adopting ‘Intensive Farming Approach’, ‘Approach for Rehabilitation of Wasteland’ and ‘Integrated Farming Approach’.

Improving the farm productivity of small and marginal farmers having cultivable land by providing them information about improved scientific farming technologies, use of improved implements, use of HYV & hybrid seeds, nutrients and pest management, increases in cropping intensity as much as possible and change in cropping pattern from traditional non-remunerative crops and varieties to new crops and varieties suited to their farming system.

B. Approach for Rehabilitation of Wasteland :

Development of horizontal production has a great potential in the district by reclaiming the cultivable wasteland viz. sodic, eroded and waterlogged area by employing low cost techniques. The possible helps from other developmental agencies/departments and credit institution have also been accounted for.

Supplementing the income of small, marginal and landless farmers by diversifying into allied economic activities, like dairy, goat keeping, poultry, fisheries, vegetable production, nursery raising and agro-forestry as per their choice. This approach enables the farmers to maximize efficiency of resource use through multi-dimensional use of limited land, time and intense use of family labour by integration of farm and non-farm activities. The family members were also motivated to adopt other agro-activities like roap making, basket making, repair of pump set and diesel engine, fabrication and repair of agricultural implements etc. for generating self employment at low level.

The above stated fact indicate that a multi-disciplinary approach is required for formulation of action plan in the district for each agro-ecological situation. Before developing an action plan and its implementation, future perspective in relation to demographic, ecological and socio-economic compulsions have been also considered to produce more food from lees and less land & water using sustainable technologies to provide more income an livelihood opportunities. 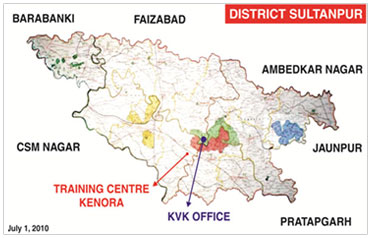