Adoption of recommended technology for reclamation and management of alkali soils at field level involves many technical and socio – economic problems but after demonstrating the technologies on the farmer’s field in the villages viz.Gairikpur, Sakra-Rampur, Rampur, palia, Bhain, Balampur, Kinaura, Tikari, Sanha, Partosh, Dandia, Rampur-khurd and Paharpur-Baish of Sultanpur district, a high percentage of farmers have gained technical know – how regarding on- farm development, selection of crops and their varieties, tree species for different uses and package of practices for better production. Alternative measures demonstrated for alkali reclamation were preferred by the farmers due to involvement of low cost. It is also found that application of water –hyacinth, FYM and other agricultural wastes in post reclaimed areas become a common practice among the small and marginal farmers.

With the reclamation of alkali soil, an additional area of 695 ha, 75 ha and 108 ha have been brought under cultivation for crop, furit and forest tree species respectively. A significant increase in productivity as well as production of cereals, fruits and bio-mass have been recorded. From the observation, it has been found that on an average the income of an individual farmer has been increased from Rs. 6,000 to Rs. 11,080 of village Gairikpur, Rampur, Bhain and Palia, whereas, Rs. 7,900 to 14,800 per family per year in village Paharpur-Baish during the year 1992-94 against the income of Rs 1,330- 3,000 from agricultural sources before reclamation.

Similarly, income obtained from the fruit crops has been increased up to Rs. 1,500- 14,000 per family per year at the age of 8th year. The forest tree species planted in alkali soils were also evaluated and found that there are appreciable increase in the value after 8th year. Apart from this, the value of land was also increased 3-4 times after reclamation in the operational areas.

An additional employment have been generated to the family members of the operational area by way of on-farm development, cultivation of crops and planting of trees. During the first year, for reclamation and crop cultivation it could need 160 to 180 mandays per ha, whereas, in subsequent years 135-140 mandays have been required permanently in paddy- wheat rotation. As for as planting is concerned, it requires 120 -150 mandays per ha during the period of establishment, while the number of mandays were reduced in subsequent years with the growth and development of the trees. In case of forest trees species, there was no need of labors after three years except watch and wards.

Apart from the direct employment in operational areas some additional employment opportunities and structural developments have also been observed by diversifying into other activities, like dairy, goat keeping, shop keeping etc.

A notable change in soil properties have observed after utilization of the land either by crop production or planting of trees. The pH of the soil was decreased, whereas, organic matter content increases remarkably in both the cases. The area covered under tree species an increase in organic matter content mainly depends on litter fall. Maximum increase of organic content in the soil (0.40% to 0.44%) was observed in case of mixed forestry, guava and aonla plantation in comparison to ber and eucalyptus planted alone.


Changes in The Soil Property :

The water infiltration rate and water holding capacity of the soil has been also improved with the growth of tree species and crop cultivation due to root penetration and increase in humus content of the soil.

After reclamation and development of assured irrigation facilities, the cropping intensity in operational area has been increased up to 180% - 192%.

The dust storm and high temperature during the summer is a common feature in salt affected areas. After reclamation and coverage of land with the crops and trees, remarkable changes in micro–climatic conditions have been observed. The temperature surrounding the plantation area is lower in summer and higher in winter up to 20degree c to 30 degree c against the outside temperature. It has been also observed that number of edible gras started growing in planted areas instead of Sporobolous sps which is a common grass of sodic land. Number of birds, wild animals and other livings were also observed, which are essential component of the eco-system.

From the observation it has been found that the most of the scheduled caste families owned alkali land were mainly depended on agricultural wages in the village or out side. Poor resource, low wage rate, unemployment for family members etc. Were the common features in the salt affected areas. But after reclamation of the land, the family members are engaged on their own land rather than working on wages on others land, The majority of the farmers were also depended on market for food grains before reclamation but after reclamation, the same families have started selling their surplus produce in the market.

Constraints in Addoption of Technology:

From the past experiences and feed – back from the farmers it has been found that there are a number of constraints which needs continuous action to overcome. They are as follows 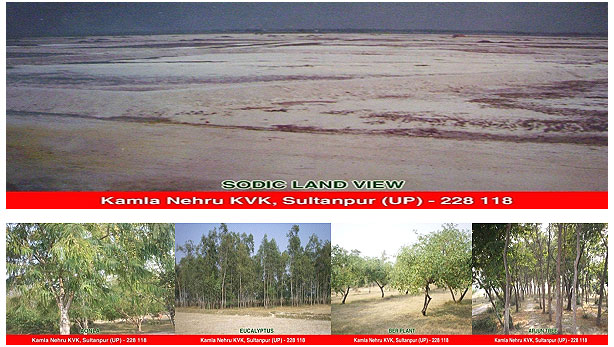 Considering the vast scope of plantation in the sodic soil, KVK has started exploring the possibility for planting of trees since 1982, with the following objectives.

As the soil conditions are inhospitable for economic plant growth for trees therefore, an appropriate modifications have been made to get responsible survival and rapid growth of the trees during early stage. Such modifications were the creation of favorable atmosphere to the root Zone of young saplings, maximizing retention of moisture and appropriate level of soil fertility through application of organic manures and fertilizers. In view of the above,on-situation trials have been conducted during the period of 1982 to 1985 and the data generated were utilized for large scale plantation of promising tree species on the farmers field as well as community land affected with salts. The result obtained from trials and demonstrations conducted on farmers field during the period of 1985- 1993 are presented below

The promising tree species tolerant to salt were planted alone or in combination to observe the suitability of different combinations, survival,growth,optimum plant density,productivity an effect on physico- chemical properties of soil.

From the observation it has been found that ber plants are more tolerant in respect to survival, grouth and fruit yield followed by aonla and guava, but at later stage aonla crop was more remunerative than guava and ber. As regards with the varieties,Banarasi-Karaka and Umran proved to the better than other varieties of ber, whereas, aonla varieties – Chakaiya and N.A.- 7 gave better response in terms of yield but growth behavior is better in francis variety. Survival and growth of Bael ( Aegle marmalos) was appreciable but fruits were damaged due to cracking of skull during the period of the year. Guava variety L-49 performed better with respect to growth and yield tha other varieties. Among the forest tree species arjun, siras, kanji,prosopis and eucalyptus are found most suitable with respect to survival and growth. The combine effect of plantation with eucalyptus gave better response in terms of economic return at early stage than the combination of other species.

Survival and Growth of Tree Species Planted in Alkali Soil:

A pit size of 1m3 for fruit tree species and 0.6 m3 for forest tree species has been found more suitable to facilitate the root growth. Breaking of hard pan present in soil profile and creation of favorable atmosphere to root of young saplings is very much essential for survival and early growth. Depending on the availability of local materials, following mixtures have been found suitable for filling of pits.

It is also observed that before filling of pits, 2 to 3 washing by fresh water minimizes the salt concentration and gave better response.

It was assumed that the growth of plantation in sodic soil will not be at part with the plantation in normal soil. Therefore, number of plants per unit area have been increased by reducing the spacing in between the plants. From the observation, it has been found that planting of ber in sodic soils at 8 m apart,aonla at 6 m apart and guava at 5 m apart is more economical than the recommended spacing for non – sodic soil. the spacing for forest tree species various from 2.5 to 4 m apart depending upon the species used for planting alone or in combination.

It has been also observed that planting of root –stock in case of fruit crops for in-situ budding / grafting decrease the mortality rate and cost. Planting of sapling in dry pits filled 5-6 months prior to planting gave maximum percentage of survival, whereas, high mortality rate was recorded under wed condition (60% -70% ). Therefore,at the time of planting it must be insured that pit should be completely dry.

Comparative Study of Budded VS in Situ – Budding in Ber :

Because of low organic matter content, poor structure of soil, low infiltration rate, poor water holding capacity and presence of harmful salts near by the pits, requires proper drainage during in rainy season and frequent irrigation during dry periods of the year. This is an essential component of package in sodic soil as it plays vital role in survival and growth of the plants. Mulching at early stage through grasses, paddy straw or water hyancinth upto age of two years after planting has been found most effective because it checks the salt accumulation near by the root-zone during the dry periods of the year. It also improved the soil fertility and check the weed growth. Basin system of irrigation is more suitable than other systems.